Main advantages when you purchase ova from Troutex:

The main objectives of our current breeding program are:

Trout breeders in Denmark have strived to improve the genetics of rainbow trout as...

In general the rainbow trout has heavy variation in the body weight and a high heritability. It is therefore possible to increase the speed of growth when the fastest growing individuals are chosen as new breeding stock.

Troutex ApS has further strengthened and improved the breeding program taken over in 2004 with help from Ejner Børsting who has more than 40 years’ experience in the field of genetics. Ejner has helped us with the design of a system that is safe, efficient and well proven. The breeding program is based on solid classical knowledge and a high selection pressure. This ensures an increased performance for each new generation.

The breeding system is setup as a line breeding facility with quantitative goals. The population consist of 5 mating groups to ensure the necessary genetic diversity to avoid inbreeding. If the sophisticated system is not followed 100%, a high rate of inbreeding can occur within few generations. Inbreed trout can lead to well documented challenges when it comes to survival and growth.

The performance is improved after each selection round

Only the best are used as parents for the next generation 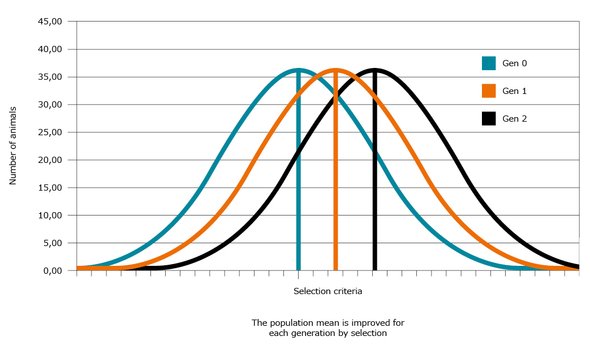 A computer stochastic simulation study is the base for design of the programme, where different models were tested, and the final and optimal programme was constructed.

The potential of the programme is to increase the performance by 100 percent in 6 generations and keep the increase in inbreeding below 1 percent per generation.

All data for each individual, such as the weight and length of the fish, mortality, processing offal etc. are logged into a database for further calculation of breeding values. The results are used in selection of coming generations.

Based on the individual selection criteria, we choose the best performing fish for the future generations. The selection is based on a selection index, where we combine the different traits according to their economical weight. 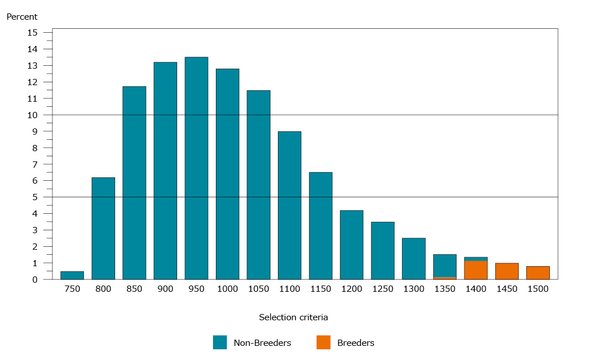 To identify each individual, every fish is registered with P.I.T.-Tag (Passive Integrated Transponder) a microprocessor covered with glass and injected in the abdominal cavity of the fish, so that each fish has its own identification number. 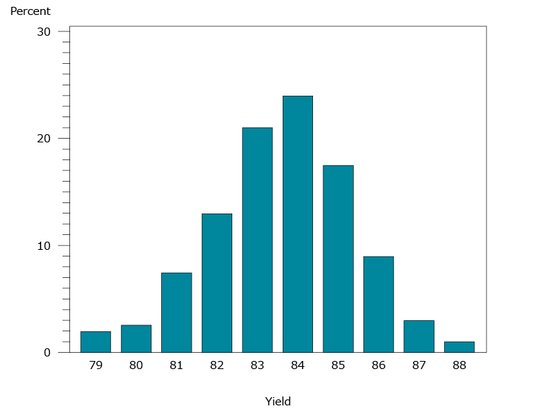 The Troutex database holds thousands of data from cut up tests, and it gives very secure estimates of phenotypic and genetic parameters. Below is an example of a cut up tests performed on trout.

If you have any questions regarding our breeding program or our products, please do not hesitate to contact us!

Trout breeders in Denmark have strived to improve the genetics of rainbow trout as far back as the early 1900s. The breeding took place individually on each farm, where the farmers choose the individuals they found most promising and used them onwards in their breeding of future generations.

In 1993 a project was initiated with the objective to carry out research in the following fields:

The program was financed by the Danish Government, by The Scientific Research-board of Agriculture and Veterinarians, and by the Danish Ministry of Fishery.

The first part of the research program proved a heavy genetic variation between breeding of families of rainbow trout. The figures from the first generations of the new fish showed a reduction in production time, lower feed conversion ratio and lower levels of nitrogen and phosphorous in the outlet water.

In June 2000 research facilities were built in Hirtshals to continue the research program of family breeding with a budget of 5.7 mill DKK from 2001-2004. The financial support came from DØA – an establishment funded by the Danish aquaculture associations, from the Danish Ministry of Food, Agriculture and Fishery.

We are here to assist

Do you need more information? Leave us your contact details and we will be in touch soon.